Skip to content
Cheesemakers Eye Up A Bigger Slice Of Market

Cheesemakers Eye Up A Bigger Slice Of Market

Waterford company sees business growth on back of Brexit 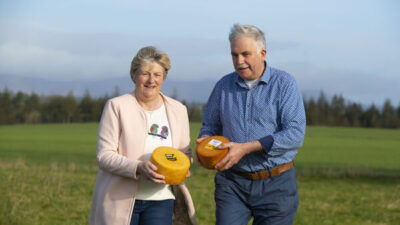 Knockanore Farmhouse Cheese in Waterford was established by Eamonn and Patricia Lonergan in 1987 when cheese wasn’t as popular as it is today.

The west Waterford company produces a variety of hard-pressed mature farmhouse cheeses, including red and white cheddars, as well as the famous Oakwood smoked cheddar.

With a 170-strong top-class pedigree Friesian milking herd, Mr Lonergan’s USP is a top-quality product, made from raw milk from a single herd. Knockanore Farmhouse Cheese products are sold via distributors to major retail chains, independent retailers, and the food service sector in Ireland, as well as to customers in UK, Europe, UAE, and US.As Eamonn says, “the jury is kind of still out” on why he became involved in the industry in the first place. He spent time in his youth with an uncle who was an inspector with the Department of Agriculture, Food and the Marine. “I would have spent a lot of time down in Wexford where he was based in the creamery,” he explains.“ So, in the 60s and 70s, I would have been looking at cheese being made there and it would have sparked an interest.”
He also remembers watching the late Veronica Steele of Milleen’s Cheese in Eyeries, West Cork, who was making cheese at the side of a mountain. “She was the first of the cheesemaker species and started around 1984/’85,” explains Eamonn. Farming can be a bit insular and isolating and I would be a fella that thinks outside of the box a bit, so I tried to see where the opportunities were. “I did a cheesemaking course in UCC; my sister and her late husband were also in the food business and I got some great advice from them. ”Meanwhile, Moorepark Technology Limited (MTL) — a joint venture company established by Teagasc with shareholders from the Irish dairy industry to provide commercial food grade pilot plant and research services for food industry customers — had established itself and Eamonn worked with a lot of people there to get his cheese business up and running. “We started out on a very small scale, we were in a garage here on the farm and it was from very humble beginnings that we grew. 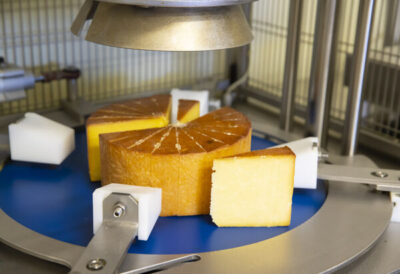 “The first five to 10 years of my cheesemaking career was very much a learning process — finding markets, development, taste and so on.”

Looking back now on those early years, Eamonn is acutely aware of the changes around standards and markets for Irish produce.

“Back in 1987 accountability and traceability wasn’t as much to the fore as it is nowadays and today we have a AA standard and British Retail Creditation (BRC); so in the 34 years we have come a long, long way.”

Knockanore Farmhouse Cheese employs 10 people at its Waterford base with a variety of cheeses to suit all tastes.

“We started out producing a farmhouse cheddar that was made from raw milk and the reason for that was because there was longevity in cheddar,” he says.

“If you make a good cheddar cheese you basically have the bones of two years to sell it.

“There was a huge window of opportunity for developing the flavour we wanted and the particular time within which we wanted to sell the product.

“Now we are producing a cheddar in partnership with Sheridan’s Cheesemongers called 15 Fields.

That is made here in Knockanore, partially matured in Knockanore and it’s cut then at about a year, year and a half and is sold as an extra, extra mature-grinded farmhouse cheese made from raw milk.”